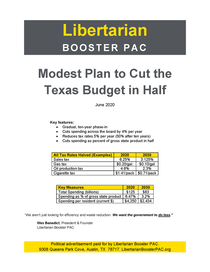 Taxes are too high in Williamson County. Our county and city leaders seem more interested taxing existing citizens and business to subsidize growing the population than they are interesting in serving the people that already live here.

The next step is to create a culture of looking for opportunities for cuts in taxes and spending. Always ask, "Is this necessary, and if necessary, who should be paying for it and what's the least expensive way to get this done?"

Leaders of every department need to be put on notice to come up with cuts that optimize important services while reducing costs.

I put together a "Modest Plan to Cut the Texas Budget In Half" over ten years. I can do the same for Williamson County.

Marijuana is almost legal in Texas. The only thing standing in the way is Lieutenant Governor Dan Patrick who keeps blocking legislation supported by Republicans, Democrats, and of course Libertarians.

Here in Williamson County, we must direct law enforcement to end marijuana arrests and prosecutions allowing us to reduce the Sheriff and Judicial system's budget and lower taxes accordingly.

Most polls show an overwhelming majority of Americans support legalization. More and more states are legalizing marijuana each year. In Texas, the platforms of the Democratic, Republican, and Libertarian Parties all call for decriminalizing marijuana.

According to the Marijuana Policy Project, 11 states have made marijuana legal for all adults, and an additional 15 have “decriminalized” simple possession, meaning they don’t impose jail time for possessing small amounts.

I will advocate for an end to marijuana prohibition at the federal level, and I will personally encourage legislation at the state level to allow the cultivation, sale, and use of marijuana.

Marijuana is safer than alcohol and has some medicinal uses. Survey show over 20 million Americans used marijuana in the past year, many in states where it’s still illegal.

I don’t advocate using marijuana. That’s a choice individuals should be able to make for themselves. Libertarians like me support legalizing marijuana because we think people should be free to do whatever they want with their own bodies. Additionally, there are many clear benefits to ending marijuana prohibition, such as reduced violence, and taxpayer savings.

Arresting people for marijuana costs a lot of money for the police and sheriff's deputies, courts, and jails. Marijuana prohibition causes violence in the U.S. and other countries as drug dealers fight over sales territories. Where it is illegal, business disputes are often resolved with violence, since they can’t go to the courts. You can’t call the police if someone steals your marijuana. You can’t report bad quality or dangerous contamination on Facebook the way we do with every other product and service. People who are arrested for using marijuana have criminal records that often make it hard to get jobs for the rest of their lives.

The National Organization for the Reform of Marijuana Laws (NORML) and the Marijuana Policy Project (MPP) provide lots of facts and figures on marijuana, as well as recently successful and proposed legislation.

Drug abuse is harmful, but the war on drugs is even more harmful.

According to a 2019 Cato Institute poll, 55% of Americans favor decriminalizing drug offenses. As a Libertarian, I would like to end prohibition of all drugs, but I recognize that ending marijuana prohibition is currently highly feasible, and is happening all around the country.

Legalizing marijuana at the federal and state levels should be a top priority, but in the mean time, we should do what we can here in Williamson County.

I oppose “the wall,” and I support making the process of legal immigration much easier.

Most immigrants want to come to America to escape from poverty or violence, to work, and to provide a better life for themselves and their families. It’s extremely difficult to immigrate to the U.S. legally, especially for unskilled workers without relatives in the U.S. (see Reason Magazine chart), so many come here illegally instead.

While some immigrants take advantage of free government services, most economists agree that on average, immigrants use social services less than native citizens, and are a net positive to the economy.

Too often, politicians use foreigners as scapegoats for problems that were caused by domestic policies. This causes Americans to fear foreigners and oppose immigration, instead of placing blame where it belongs, on politicians, and on ourselves for electing them.

Instead of banning immigrants from Muslim countries due to fears of terrorism, we should stop inciting terrorism by bringing our troops home from overseas, and we should stop meddling in the affairs of foreign nations.

While Libertarians like me oppose taxpayer funded welfare and foreign aid, I wholeheartedly support personal initiative and hard work. Allowing people to immigrate from poor countries to America allows people to lift themselves out of poverty without burdening American taxpayers.

I highly recommend the Cato Institute’s The 14 Most Common Arguments against Immigration and Why They’re Wrong.

Economic ignorance, racism, and an irrational fear of terrorism cause some Americans to oppose immigration. I’ve spent nearly six months in Mexico, Italy, and South Africa, and have worked in or traveled to over a dozen other countries. I’ve found that people are remarkably similar throughout the world once you get to know them.

Libertarians like me help to educate people so they’ll realize that economic opportunity is unlimited and that we can all prosper and live peacefully together.

We can make America richer, stronger, and allow more people the opportunity to lift themselves out of poverty by making it easier for people to immigrate to America.